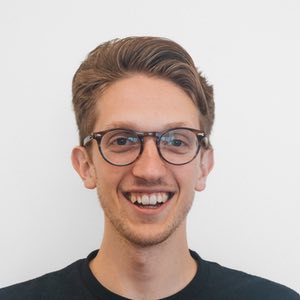 Sydney Shea didn’t grow up dreaming of becoming a Product Designer — she didn’t even know Product Design was a possibility. It took traveling down many paths, including earning an Architecture degree in college, to learn the skills and discover the opportunities that helped her get to where she is today. 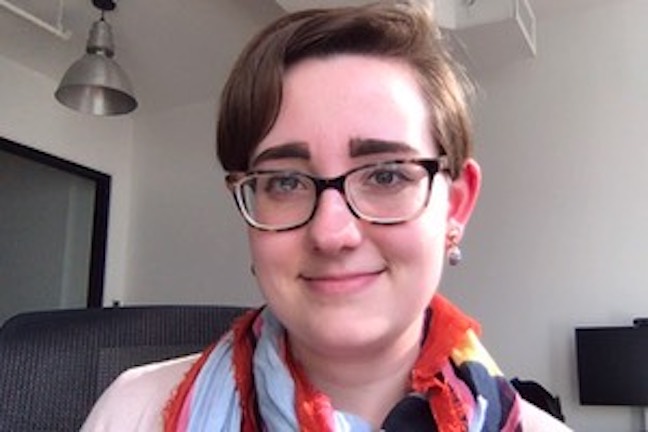 Now a Senior Product Designer at Aptible, Sydney seeks to deeply understand the problems that our customers face, then solve them so those customers can confidently build their compliance programs. Read on to learn more about how Sydney got to Aptible and what she learned from the journey that brought her here.

This interview was originally conducted by Jessica Li for Elpha, the professional network for women in technology.

How did you first get into design?

I have been interested in design ever since I was a kid. I grew up in a pretty small town and although I was obsessed with colors, patterns, typography, packaging, poster design, I didn’t really know there was the possibility of a career there beyond a Bob Ross-style artist, which wasn’t for me. I certainly had no idea anything like product design existed. I got into capital D Design because a Design Editor at The Yale Record, the humor magazine I wrote for in college, desperately needed designers. That kickstarted a path that ended with me taking almost every design studio class Yale would let undergraduates into as well as becoming Design Editor myself for two years.

I read that you actually majored in architecture?

Yep, that’s right! Majoring in architecture taught me that I didn’t want to be an architect. I would have done a design degree, but Yale didn’t have one for undergrads, so architecture it was. It appealed to me because it was a different kind of problem solving, and you got to work with your hands which I loved (and still do). It was excruciatingly hard. I’m still glad I did it, though. My presentation skills drastically improved, along with time management skills and logic. It also taught me a lot of things that have informed my product design work; in both disciplines, my user is independently experiencing my designs. They have no idea what context I had or which decisions I made to get there. But unlike product design, if they can’t find the bathroom, I can’t fix it in the next sprint.

You mentioned getting into print design, but how did you discover product design?

After college, I went to work at Mental Canvas, a company developing an enterprise authoring platform that allows you to hand draw in a digital 3D space for things like animation, architecture, and media and advertising. I was there for five years as the only non-technical team member, and for most of it my title was just Designer. I actually negotiated it to Product Designer in my last year there — titles can be just as valuable as a raise! I ended up taking on a wide scope of responsibilities under that title, including customer support. Handling that was kind of a lucky break. It gave me a deep sense of empathy for our users and provided a lot of opportunities to do my own research to try to improve their experiences.

I also got to participate in things I don’t think I would have gotten to go near in a larger company. For instance, I was our designated product demo-er while we were fundraising. That provided a lot of interesting business context, as well as really driving home to me how lopsided the VC industry is. I remember having meetings where our founder and I were the only women in wood-paneled boardrooms full of dudes in suits. Designing for 3D, especially a product like ours geared more towards users with a pen-and-paper than a 3D modeling background, was a challenge. What’s straightforward to design in a 2D drawing system starts to have a lot of sticky problems once you introduce another dimension. For instance, what would a user expect their pen width to do when they start drawing far behind the space where they started? It takes a lot of iterations to get to a solution for that problem that feels intuitive, like a natural extension of their normal sketching. And that’s really always my goal while designing — making people feel like they’re better, more capable versions of themselves. 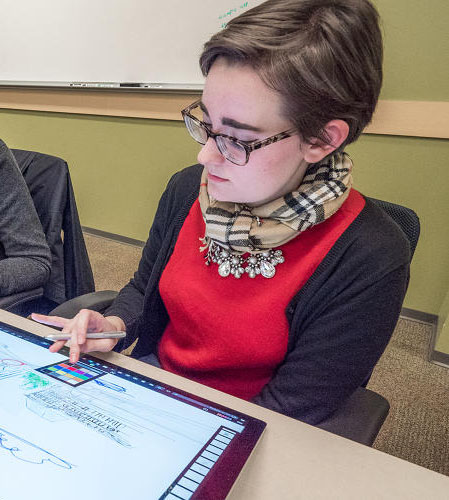 I’d imagine it was quite a change to switch from a highly visual product like Mental Canvas to Aptible, where you’re in an industry as complex as security.

It’s definitely different, for sure. There’s a lot more text, for one thing! But ultimately I still have the same fundamental goal: deeply understanding the problem my user is trying to solve and trying to make that easier for them so they can be more confident about what they’re doing.

Is there anything different about design at Aptible, compared to the rest of your career?

There’s a heavy emphasis on feedback and collaboration, which I think is amazing. You’re expected to give and get productive feedback constantly. It took some getting used to, but as a designer I think it’s really beneficial because it forces you to not be too precious about designs. You can throw a rough sketch in Slack and someone will point out a really obvious flaw before you dedicate hours to building out the high fidelity versions, so it’s much more efficient. Often that early feedback results in a design that is nowhere near where you started, but is a much better solution. With collaboration, the context you can get from the team is really powerful. I feel like a lot of places pin in “user experience” to the final stages of the process but to me almost everything we do taken together is the user experience. If someone has an awesome call with their support contact or their bug gets fixed in a day, that’s part of their experience. And on the flip side, I can design the best product in the world, but if no one realizes it can help solve their problems because I’m missing all the other aspects of our business, then it’s meaningless. The other members of our team often have amazing insight into how I can best solve the problems I’m working on, and sometimes I have the opportunity to come up with design solutions to problems they just thought they were stuck with. Collectively it makes for a much stronger product and company.

It sounds like you know a lot more now than when you were first starting out! Is there any advice that you would give to your past self?

Stream of consciousness advice here: don’t overanalyze things so often. People watching you present something generally want you to succeed; nobody makes the effort to come to a presentation because they think it’ll be bad. Though it may not seem like it at the time, you might be more grateful for the jobs you didn’t get than the ones you do. Lean on your community if you need more context on things you’re struggling with - on that one, I sure wish I had something like Elpha when I was starting out! And lastly be genuine about what you’re passionate about. The most interesting opportunities I’ve had didn’t come from the times when I was trying to make myself “the perfect designer” but rather when I pursued what I found most interesting.